If you don’t read the rest of the article, it can be summarized as: 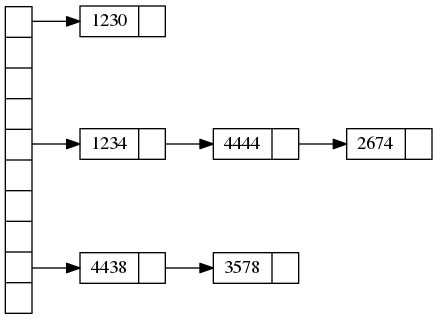 On the left we have m buckets. Each bucket contains a pointer to a linked list of data elements.

We also need a hash function h that maps data elements to buckets.

In the above example we have 10 buckets, data elements are numbers, and the hash function is the last digit of a number: m=10, h(x)=xmodm.

To find an element, we first compute the hash function, and then scan the list in the appropriate bucket. This is quick as long as we don’t have too many elements in the bucket.

The worry is: what if the hash function is not well-suited for our data and most elements end up in the same bucket? Then the access time will be bad.

For instance, if the keys are prices of products in a grocery store, then most prices will end with the digits .00 or .99. If we use the last two digits as the hash function, we would store everything in two buckets. This wouldn’t work well!

This is the reason many programmers are afraid of using hash tables. Is my hash function good for the data? Should I switch to the newest and fanciest hash function that somebody has recently published? How do I test it with my data?

I will argue that with appropriate implementation, these are non-issues. We will see that a hash table should really be a randomized data structure. If we do this correctly (and it’s not hard to do), the performance will be good in expectation regardless of the data.

Unfortunately, common libraries do not do this correctly (yet).

Given A and B, compute:

There are better ways to solve the problem but we just want to use a hash table as an experiment.

It’s not that we were extremely unlucky. This will happen every time we run with these inputs. If you want to know the answer for A=1000000, B=1056323 you have no choice but to wait for 45 minutes! (Or you modify the program, but that’s not the point.)

Well this is ridiculous. We just want to add a million numbers. It shouldn’t be that hard.

I’m sure the readers already suspect what the issue is. Hash table collisions!

It turns out that my implementation of the C++ standard library uses 1056323 buckets for a hash table of size 1000000, and the hash function it uses is simply h(x)=xmodm. Since our numbers are all divisible by 1056323, everything ends up in bucket 0.

A solution many people use in practice is to, instead of a simple ad-hoc hash function like h(x)=xmodm, use a much more complicated ad-hoc function, with a lot of arbitrary arithmetic instructions thrown together: shift bits around, add things together, multiply things, xor things, etc etc.

Examples of this are: MurmurHash, FNV Hash, PJW Hash, Jenkins Hash, Spooky Hash, etc etc. People come up with them all the time.

There isn’t really any secret sauce behind these functions. Various authors simply pick an arbitrary sequence of arithmetic operations to make the function more complicated.

This doesn’t really solve the underlying problem. What it does is sweep the problem under the rug. Because the functions are so complicated, it is much less obvious what kind of data is bad data. It is also less likely your data will accidentally happen to be worst case data.

But it’s not guaranteed. It could just so happen that your type of data interacts with one of these hash functions in a bad way.

Perhaps more importantly, it is very easy to deliberately search for and find bad data. This leads to a denial of service attack against your program. If, for example, you’re running a website and the backend of your website uses a hash table, an evil user can deliberately send you data that will cause your server to run very long computations due to hash collisions.

What if we use a random function as the hash function? Just pick any function randomly out of the space of all possible functions.

It looks like this would work. Let’s say you have n elements in the hash table, a1​,a2​,a3​,….an​. Let’s also assume we’re looking up an element x that does not exist in the table (worst case scenario for lookup). The expected number of elemements in the same bucket as x is:

Therefore the expected lookup time would be O(1+mn​).

As long as we have enough buckets with m≥n, lookup time is O(1), i.e. constant time in expectation.

Great! Can’t get any better than that.

Just to store a description of randomly chosen hash function, we need at least log2​mU=Ulog2​m bits. In other words, we would need to store a huge array of hash values, one entry for each possible key. But if we do that, then we could just as well not use a hash table at all, and just store the set elements directly in that array! The whole purpose of having a hash table is to avoid having an array with one entry for each possible key.

So this doesn’t work. But there is a better way.

The idea behind universal hashing is similar to the the idea behind Utopia. We will still choose a random hash function. But we limit the set of possible hash functions, so that we can store it compactly in very small amount of memory.

The only property of random hash functions that we really needed in the Utopia proof was: for two different keys x and y:

It would also be OK to have a slightly larger bound, say m2​.

If your keys are integers in some range, do this:

The Carter-Wegman hash function is:

Proof sketch. For a given pair of keys, x=y, (ax+b)−(ay+b)=a(x−y) is not divisible by p, because a,x,y are all smaller than p. Therefore ax+b≡ay+b(modp). For a random choice of a,b the pair (ax+b,ay+b) is in fact a uniformly random pair of non-equal numbers modulo p. There are p(p−1) such pairs, and less than mp(p−1)​ of them match modulo m. Therefore collision probability is less than m1​.

So, just use this function and you’ll be fine!

One possible complaint might be that this function involves two expensive modulo operations. However both of them can be avoided:

Suppose we have a data structure consisting not of just one number x, but of n numbers (x1​,x2​,…,xn​).

This guarantees collision probability of at most m1​+p1​<m2​ for different keys, by a very similar proof. It’s sufficient that at least of the xi​ is different.

Suppose that we have variable length data (x0​,x1​,…,xn−1​), so n is not a constant. We only have some large limit L on the length.

In this case what we can do is:

The hash function for variable length data is:

Inside the parentheses we are evaluating a polynomial of degree at most L modulo p at a random point a.

If the two polynomials are different at a, then we’re applying h to two different integers. In this case we know the probability of collision is at most m1​.

Therefore the total collision probability is:

This is good enough to get O(1) expected access time to the hash table.